YESTERDAY WE SPENT SEVERAL HOURS FILMING with Ukuri Kuganze, a group of genocide perpetrators and survivors.

They actively share their stories and provide practical help – like building houses and distributing food – in their communities. They hope to provide the courage for others to confess and ask for forgiveness and, as they put it, the ‘energy’ for survivors to be able to forgive. They are giants in my eyes – they spoke with openness, clarity and acceptance of what has happened in their lives. They are absurdly poor, living in rural Rwanda, but they know so much about how to live in the face of what would surely be the end of most of us. 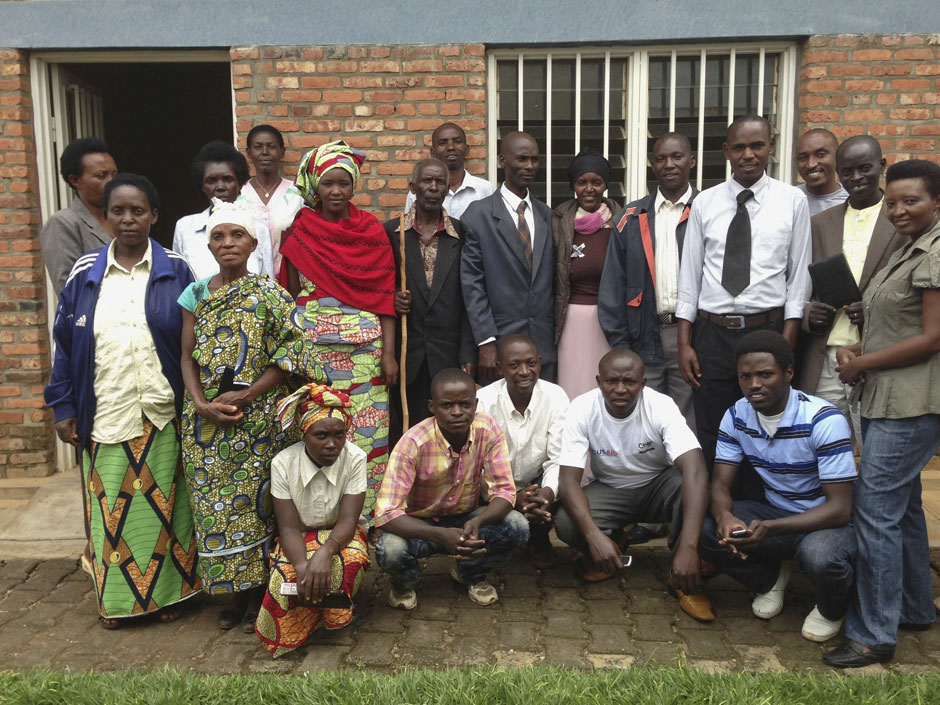 A few stand-out bits were:

“As a perpetrator I had to put myself in the shoes of the victims, to value them as people and to admit – to myself and to others – that I had done terrible wrong. Then I had to value myself as a person too.

“It is a heavy burden to forgive. It is a long process. but when I forgave him, I felt relief and I had my life back again.

“It takes great courage to ask for forgiveness. When he came to me, his courage helped me have the energy to forgive him.

“Before you forgive, your life is stagnant in hatred. You have lost your family who died, and they will never come back. I realised that I didn’t have my family, and I never would have again, and I didn’t have him. I had no relationship – when you are very poor you need relationships in your community.

“I realised that if I forgave him, although I would never have my family back again, I would gain him”.

And gain the ability to look to the future again, instead of being stuck in the past.

“As you can see, we are very poor. We need partners, we need sponsorship to be able to keep this work going. We had support from World Vision, but they have stopped. their focus has moved from reconciliation to development. But there are so many people who have not forgiven, or have not confessed – many of them are running mad.

“In those days, we were very, very poor and we were told by our leaders that the Tutsi were to blame. That we were serving our country to kill them. So, in a way, we felt justified. Those who have not realised in their own heart that what they did was wrong still feel that way, and they are a danger to our country. They are the ones who could kill again, because in their heart they still carry those beliefs; that is genocide ideology, and confession, asking for forgiveness, reconciliation… these are the things that will protect our country.

“People who are hiding in other countries, people who were organisers of the genocide, should come home. Rwandans know how to forgive, and if they confess and come forward, Rwandans will forgive them. But first, they also need to come home to face justice. We have been in prison and now we work to help the survivors, who lost their families and the lives they knew.

“Organisers need to come face to face with all of us and face justice – this is the way to value survivors”.

“They also need to apologise and seek forgiveness from us, because they mislead us so badly. They taught us to do terrible things and they need to seek our forgiveness. Until they do, even if they are living comfortable lives in the west, they will carry those memories in their hearts. You cannot run away or hide from your own heart. Only when they come home and confess will they find peace of mind and a light heart.

These insights are pretty powerful when you’re sitting with a man who you know – through his honest confession – has killed 14 people and the mother of one of those is sitting nearby, with only one hand, and a peace in her demeanour that seriously passes all understanding.