March 17, 2013 In daily life, the natural environment, tourism and travel

RWANDA IS JUST SOUTH OF THE EQUATOR and its relatively high altitude (most of it is well over 1500 meters) means that the climate is often soft and pleasant.

Temperatures vary considerably from place to place. In Kigali the average temperature is about 21°C. This graph, and the notes below, show the traditional pattern over the year. But Africa’s weather patterns are becoming increasingly unpredictable, so on any one visit the reality could be quite different. 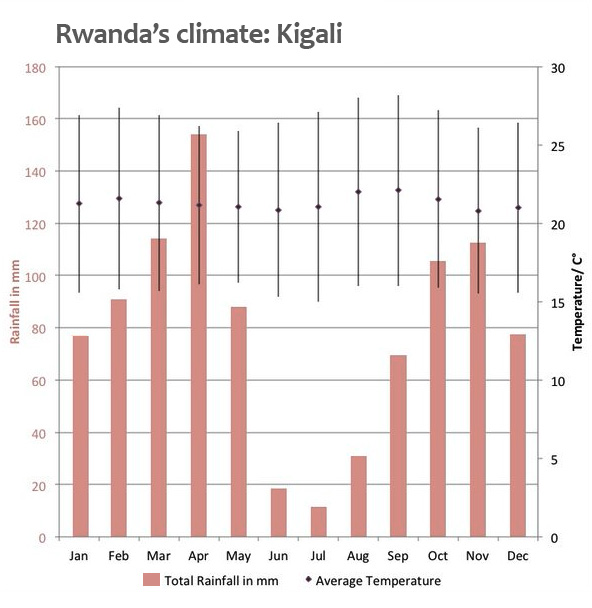 January: the rain subsides gradually.
February: end of the ‘short dry season’ as the rain increases slowly.
March: start of the ‘long rainy season’.
April: the peak of the wet season; it’s the wettest month of the year.
May: heavy and persistent rainfall.
June: the rainfall has mostly stopped, the days are clear and warm.
July: the dry season is now in full swing – Rwanda’s best few months.
August: weather is hot, but during dry season often light cloud cover.
September: end of the dry season in the middle of the month.
October: a wet, humid month as the ‘short rainy season’ has started.
November: the rainfall is still high.
December: the rain level drops as the ‘short dry season’ begins.