Well, this morning we did our first lot of filming. So pleased!

We were delighted to find out yesterday that the once-a-month community clean-up day was on the first Saturday of every month: today! So we got out our precious filming-authorisation letter and headed of with the lady who owns the guesthouse we’re staying in to film the local activities.

As we headed off, the street that even late last night was buzzing with a mix of cars, buses, motorbikes and people, was entirely empty and quiet. All the shops are shut until the afternoon; and this happens across the whole country, whether city, town or countryside.

Umuganda is an amazing concept. Every month, the whole country mobilises to do public works in their local area. The nation is divided into countless umudugudu (groups of 200 households). Each umudugudu meets to decide what needs doing in their local streets – road maintenance, roadside weed management, painting local halls – and everything stops for a morning, while everyone pitches in. The whole community is out there, working together.

“It brings people together who were enemies in the genocide; it helps them by working alongside each other”

We met the vice mayor of Kigali, who was out there too, in the muddy street with her spade, clearing weeds. She is in charge of Social Development in Kigali and was explaining that umuganda helps on many levels – it brings people together who were enemies in the genocide; it helps them by working alongside each other, making decisions together, and taking ownership of their local areas. ‘Everything is education’ she said. 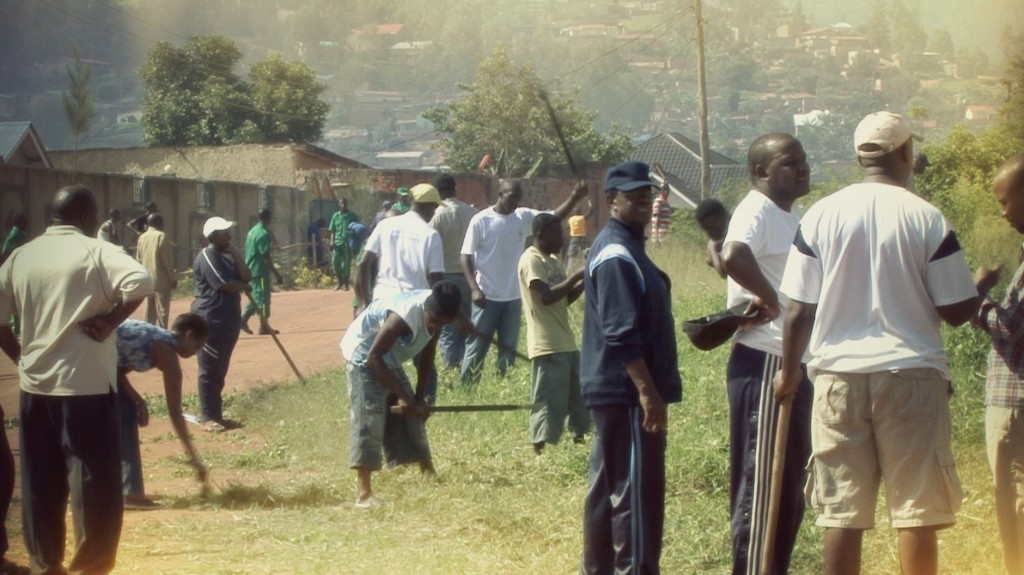 After the work was finished (it had started at 7 am and went till about 11) all the local people met together, and the mayor and several others in leadership spoke to them at a big grandstand just around the corner. It was held together with criss-crossing bamboo and long bendy wooden poles. She spoke about the upcoming elections, the need to register to vote (from age 16), and coming weeks of genocide commemorations.

She talked about the need for the community to support one another through this dark time. When you think about the fact that many of these people were probably involved in killing, or witnessed terrible things, or were victims themselves at the hands of some of these neighbours, her words take on hew importance. So does the work that these amazing people have just been doing together.

Umuganda is one of the many simple but profound government policies – grassroots initiates eventually brought into law by the will of the people – that have me in awe of this tiny nation.